With such a large presence of combustible material in one place the biomass conveyor required a fire detection system that could quickly and efficiently detect fires. The FFE Talentum IR3 was chosen as the ideal detector for this environment due to its false alarm immunity and speed of flame detection.

PROTECTING A CRITICAL LINK IN THE RENEWABLE ENERGY SUPPLY CHAIN

As the world grapples with dwindling fossil fuel reserves and the threat of climate change, developing alternative means of generating energy is of critical importance. Initial steps in reducing fossil fuel dependency are being taken by the development of ‘waste to energy schemes across Europe and North America. These burn non-recyclable domestic and industrial waste (including plastic) in specialist incinerators to produce heat and power. This reduces the amount of such waste in landfill sites where it can take decades to decompose.

Another alternative to fossil fuels is biomass, plant-based material that is not used for food. One form of biomass comes in the shape of small pellets created as by-products of the wood and agriculture industries, and there is a growing market for using these as fuel for electricity generation. A number of Britain’s remaining coal-fired power stations, such as Drax in Yorkshire and Lynemouth in Northumberland, are being converted to accept biomass, and this requires the development of infrastructure to transport and store the pellets. FFE were recently selected to provide fire detection for a new biomass conveyor at Liverpool Docks.

The conveyor is part of a biomass handling depot constructed at Gladstone Dock in Liverpool by energy supplier E.ON. It actually consists of three separate conveyors with an overall length in excess of 700 metres, which carry the biomass pellets directly from the hold of the cargo ship to either a storage building or to a train for transporting to a power station. The presence of such a large quantity of combustible material in one place demanded a detailed and comprehensive fire and safety plan for the whole site, and it was decided that the conveyor needed a dedicated fire detection and suppression system. Fireworks Fire Protection was commissioned by E.ON to recommend and install a system.

Due to the nature of the fuel, which can support both smouldering and flaming combustion, a highpressure water mist system was installed, with pipework and nozzles designed to apply water at a specific flow rate and spray pattern. To improve the efficiency and speed of response of the system, the conveyor is divided into zones, each equipped with a flame detector, control panel, valve and set of spray nozzles. Each zone panel is linked in turn to a sitewide addressable panel which triggers the water mist to operate in zones around the location of an alarm, and immediately stops the conveyors – essential if the fire is to be contained quickly. Rapid and reliable flame detection was a critical design requirement, and so Fireworks selected FFE’s Talentum detectors to be used in the system.

The detection system was faced with several specific challenges in this installation:

The flameproof Talentum IR3 flame detector is designed to cope with all of these challenges. Three IR sensors in the unit can detect flames through dust, steam or smoke. An in-built algorithm analyses the shape and variation of the IR signals to determine if they match the characteristic flicker of a flame. Finally, the sensors each respond to different wavelengths in the infrared region of the spectrum, with FFE’s broad spectrum technology precisely distinguishing between a flame and other sources of radiation such as ambient and artificial lighting.

This level of false alarm immunity, combined with the speed of detection, made the Talentum IR3 detector the ideal choice for this application. Although not critical in this instance, it can also detect flames from a wide variety of fuel types, and so would be ideally suited for protecting infrastructure in energy generation schemes using other waste materials such as plastics. The flameproof (or Exd) version of the detector was chosen for two reasons. Firstly, it prevents any chance of a spark from the detectors igniting the explosive dust. Secondly, the rugged IP66-rated casing provides exceptional protection for the detectors from water and dust ingress in the relatively harsh working conditions. For these reasons, and due to their ability to detect flames through high levels of dust, the detectors can be mounted inside the conveyor housing to provide the fastest possible detection of a fire in each zone.

With the conveyor built and the fire protection system installed, Fireworks conducted tests to check the response time. In one of these tests, a small burner flame was ignited at a distance of approximately 7 metres from the Talentum detector. Within 15 seconds of the flame being ignited, the water mist was activated. A video of this test can be viewed at https://www.youtube.com/watch?v=m0QHbVILK2o

Steve Titterington, Marketing Manager at Fireworks, commented “The Talentum flame detectors from FFE are the fastest and most reliable on the market, as well as being highly cost-effective and having excellent false alarm immunity, and so we have no hesitation in recommending them to customers such as E.ON for protecting assets in the important and growing area of energy generation using biomass.”

By combining the rapid and reliable response of FFE’s Talentum IR3 detectors with the fast flame control and high cooling capacity of water mist, Fireworks has ensured that the Liverpool Docks biomass conveyor can safely play its part in fuelling a greener future for our energy generation industry.

Do you have an interesting project with Fireray or Talentum detection? Contact us at marketing@ffeus.com and we can help write and publicise it. 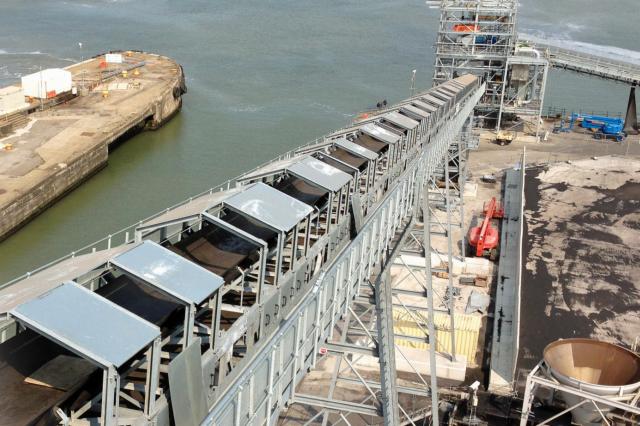